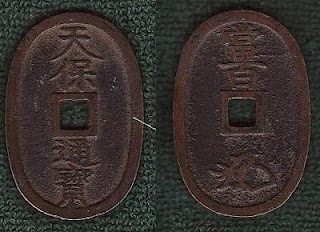 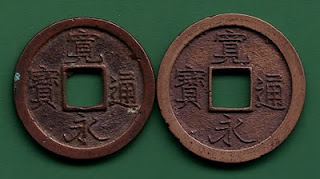 Because Tenpo Tsuho carried a high value, every daimyo wanted to cast this coinage in their provinces. Profits were guaranteed! Some minters created their own seed coins from scratch, but most of them used the regular government coins in circulation: the three varieties of Honza. For that reason, we have many varieties today that resemble authorized issues.

Some of their initial trials ended up in failure. What they did not realize was that metal shrinks when cast in mold. A 49mm Tenpo would come out measuring 47mm. In addition, molten metal poured into oval shaped sand mold has a tendency to “round” itself while cooling. In other words, there is a natural, lengthwise pressure applied within the mold that tries to take a round form. As a result, the finished coin loses a bit of lengthwise measurement, while gaining its width slightly. We need to remember that these illegal mints were trying to pass their coinage as legal, government coins. Size mattered. Looks mattered.

Illegal mints get smarter. They are now producing coins of correct size and weight, more-or-less. Many mints use a wrap-around now. This thing called “wrap-around” is a ring that is a few millimeter wide. Tenpo Tsuho is popped into this ring. This simple process added that needed, extra measurement. Coins cast from this process become seed coins. However, these coins had very wide rims as a result. The rims have to be narrowed, so they file and smooth out the inner oval rim. This is why some varieties of Tenpo coins have more space between the rim and the characters, for both obverse and reverse. Such varieties are called “sekkaku.” It means the characters look as though if they are cluttered around the square hole. Of course, this is not the case, but they appear that way.

Another type of ring is a sort that not only adds measurements to the edge but adds a bit of thickness to the rims as well. Just imagine it with aluminum foil. Wrap the foil around the edge of a coin and then fold over the excess over the rim. By using this procedure, a bit of extra weight can be added to the finished coin. Coins cast from this method have the rims slightly taller than the characters, or the characters slightly lower than the rims. In other words, the characters seem as though they are sunk into the field. We call this variety “gakurin.” See photo above of Tosa Gakurin coin. If you are familiar with Shin Kanei Tsuho, there is a well-known “gakurin” called Osaka Nanba Gakurin (see photo above… left, circulation coin; right, seed coin). This Kanei coin was made from another process and is illustrated here to show another example of the meaning of “gakurin.”

The texture of Tenpo Tsuho is of another study. Field appearance alone could determine the origin of coin. However, this is subjective at best, and other matters need consideration. Early coins from Honza appear as though they were cast from molds made of plaster of Paris or dental plaster. The field texture is smooth. Fine sand they used was only available from one place, Boushu, which is present day southern coast of Chiba. This fine sand was protected by the central government and was valuable as gold was.
Illegal mints did not have access to this sand. As a result, the sand they used was low quality. Molds made from ordinary sand cast coins of pebbly, sandy appearance, and of course, coarser the sand, rougher the fields. During the late production period of Honza coins, Boushu sand is exhausted, and the mint is forced to use lower quality sand. The quality of cast coins suffers. Sometimes these lower quality government coins are mistaken for illegal mint coins. Color of copper, differences in the way the characters are written, weights and measures, and the general appearance must be considered for proper attribution.
Posted by ME at 8:39 AM